Join us for a screening of Dr. Vivekanand Palavali’s documentary Screwed: By the Greedy Business of American Healthcare. This event is Co-sponsored by Center for Inquiry-Michigan (CFI) and the Committee to Protect Medicare and Affordable Care.

Following the film there will be a panel discussion with Dr. Palavali, Abdul El-Sayed of Southpaw Michigan, and Dr. Rob Davidson, from the Committee to Protect Medicare and Affordable Care. 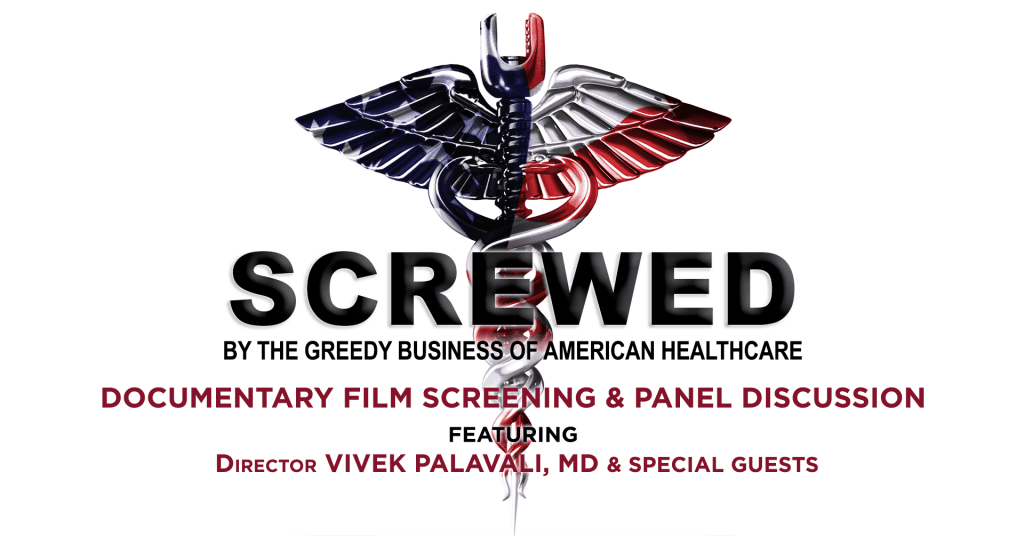 The United States of America spends around three trillion dollars, 17% of GDP, annually for healthcare. In spite of this, millions of Americans suffer without quality, affordable healthcare. As a result, thousands die annually, and many become financially bankrupt from medical costs. Meanwhile, many developed nations spend far less than America and provide universal healthcare allowing their citizens to live long and healthier lives.

Unfortunately, the United States of America treats healthcare as a profit-oriented business, instead of a basic human right to all citizens. The greedy and powerful special interests of the medical industry control politicians and healthcare delivery – making it the most expensive and out of reach system in the world.

Screwed is a sequel to the Michigan Emmy nominated documentary, Bitter Pill, which predicted that Obamacare would not be able to provide affordable, quality healthcare to all American citizens and millions would still be left uninsured or underinsured. This sequel highlights the suffering millions of Americans will have to endure if Trump’s administration repeals Obamacare but does not provide quality affordable healthcare to those citizens.

Watch as Dr. Vivek Palavali, from a neurosurgeon’s perspective, sheds light on why America is the only developed nation that does not provide healthcare to all of its citizens. Every other Western European nation provides quality universal healthcare that is affordable with better outcomes compared to America.

Following the film there will be a panel discussion featuring Vivek Palavali, MD, Director, Abdul El-Sayed of Southpaw Michigan, and Dr. Rob Davidson, from the Committee to Protect Medicare and Affordable Care.

Tickets will be $6 for non-members, $5 for CFI, Wealthy Theatre , and sponsoring organization members. Doors open at 6:30pm. Tickets can be purchased here.