Join us for “Outsider Test for Faith” with John Loftus! 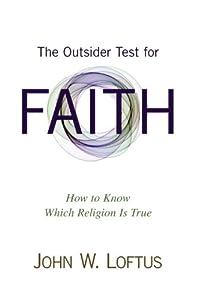 Meetings are open to the Public

Learn about Parking, Accessibility, and more.

John is a former Christian minister and apologist with M.A., M.Div., and Th.M. degrees in Philosophy, Theology, and the Philosophy of Religion from Lincoln Christian Seminary and Trinity Evangelical Divinity School. While in school John majored under Dr William Lane Craig, the infamous leading evangelical apologist/debater of our generation. John also studied in a Ph.D. program at Marquette University for a year and a half in the area of Theology and Ethics. John authored the book, Why I Became an Atheist: A Former Preacher Rejects Christianity, and one titled The Outsider Test for Faith: How to Decide Which Religion is True, both published by the premier atheist publisher of our generation, Prometheus Books. He has edited two other important books, The Christian Delusion: Why Faith Fails, and The End of Christianity. He also co-wrote a debate book (with Dr. Randal Rauser) titled, God or Godless. (That’s five published books in five years!) John has traveled America speaking for and entertaining audiences from Ohio, to New York, to Louisiana, to Texas, to Los Angeles, to Colorado, to Wisconsin, and many places in-between. He even did a gig in Toronto, Canada, and somehow passed the border checkpoint as an atheist.